A Sound System that Opens Your Eyes

People experiencing a home theater system in their living room for the first time often call it a moving experience. In fact, it can be quite eye-opening.

Nothing really prepares you for all those ambient sounds floating around behind you—the people talking in the coffee shop just off the screen to the right or the sound of a motorcycle zooming by you on the screen to the left. First-timers often catch themselves physically turning to see if it really did just drive by.

We’ve gotten so used to the unidirectional sound coming from our TV sets over the years that we just don’t know what to expect when we hear it for the first time. Even some of the newest TV models boasting great sound can’t compete with a 5-speaker home theater system. Many of them pump out some pretty big wattage. But the depth of sound on a home theater system is something else again. It expands the field of sound and immerses you into it, as opposed to having it come straight at you from the front.

For movie aficionados, there’s really no substitute if you want to recreate theater effects at home. And for sports fans, a home theater system really can put you at the center of the action. Imagine sitting in your living room watching a baseball game and, suddenly, a heckler yells something at the pitcher from directly behind you. After you realize that the guy is not in fact in your living room, you’ll catch your breath and marvel at how truly advanced sound has become. It’s amazing. 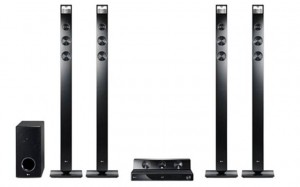 The difference starts with the fact that it’s a 9.1 speaker system. On the tallboy speakers you see above, LG placed four upright 3D speakers which pump sound upward. By filling the sound field above the listeners’ heads, it’s like installing four height channel speakers, as they’re known to industry professionals, on the upper wall. This is possible because the 360° reflector inside the upright 3D speakers disseminates sound evenly to the entire room, letting the sound shower down on the listeners. 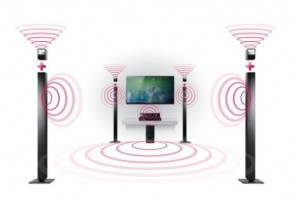 By creating a new dimension in sound coming from above, instead of just coming at you from your left, right, or behind, it truly envelops you as the sounds transport you to the scene.

On a standard home theater system, the sound of a helicopter might be recreated off to the side or with a back speaker. But with the new 3D sound, the sound actually rushes over your head as the helicopter does on the screen. You can be forgiven for ducking because it really is that dramatic. And as anyone who’s seen a 3D movie before knows, the ducking is half the fun!

We tested it out recently in Moscow with some top sound journalists and they were blown away. Alexsey Korneev, editor for top AV magazine STUFF, writes, “Home Theater? No, this is more than just a device. LG created an entertainment-cultural complex with IMAX cinema, dance floor, computer club, and also exhibition of best designer solutions.” 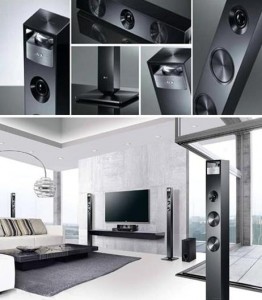 The beautifully designed speakers are a perfect fit with any interior

On top of the sound, the new CINEMA 3D SOUND Blu-ray™ Home Theater looks great and acts even smarter. The design incorporates a premium cubic look with a metallic silver hairline.

It also works intelligently and conveniently to provide outstanding Smart TV functions, including a wide array of premium content and apps. If you have an iPod or iPhone, you can simply cradle it to enjoy your own playlists and you can even download an app that converts your smartphone into a remote for your Home Theater. It also supports a more convenient method of sharing of all your media, including movies, pictures and music, via DNLA and Wi-Fi Direct™.

Eye-popping, jaw-dropping sound, because 3D is more than just a visual thing and your ears want in on the action. But don’t just take our word for it. Why not head to the store and hear the difference yourself. We’re sure you’ll catch it in the first split-second.