CES 2012 Roundup of our Hottest Exhibitions

The Vegas venue has been cleared out, and the manufacturers and reporters have all packed their bags and returned home. But the amazing products unveiled at the 2012 CES are still the talk of the industry.

Here’s a roundup of all the great responses we’ve had from the media about our Home Entertainment products at the 2012 CES.

They just can’t get enough of it. In fact, if there was one single most talked about product at the show, it’s definitely LG’s 55-inch OLED TV. This stunningly beautiful unit stole the hearts of reporters and took the entire show by storm. Even before the CES kicked off, it was the center of media attention, and the response upon unveiling was that it was well worth the buzz. And before we forget, it is the world’s largest, the world’s slimmest (4mm), and world’s lightest (7.5kg) OLED TV.

Engadget, a well-known tech review site, called the incredible picture “razor sharp.” The Verge, another renowned tech review site, said the colors, contrast and viewing angles were “too awesome for us to count pixels.”

Business Review USA mentioned that, “The picture on the OLED TV is incredible.”

Now, we weren’t the only manufacturer to unveil a 55-inch OLED, but CNET agreed with us that ours is tops when it named LG’s 55-inch OLED TV as Best of Show in CES. 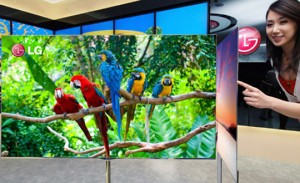 Check out this graphic on our amazing OLED TV here.

The funny thing about the bezel on our New CINEMA 3D TVs is that it is barely noticeable. In fact if we didn’t say anything about it, you’d probably think the TVs didn’t have one. But if you must know, the thinnest of our new models measures just 1mm! Sitting comfy on your couch, that’s virtually invisible.

And the reporters were thoroughly impressed. Tech Radar called our 1mm bezels “outrageous.” CNET went as far as to say that it is “one of the most beautiful TVs the company has announced.” 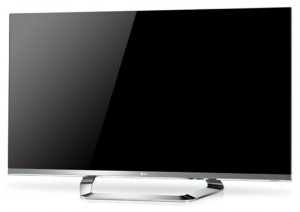 Several manufacturers introduced a new Google TV at 2012, and LG’s very own version, together with our amazing 3D technology, made quite a splash.

The LG Google TV comes with a specially designed Magic Remote with a Qwerty keyboard. And among other things, this remote is what the press fell in love with the most. Engadget commented that the “Magic Remote Qwerty is probably our favorite out of the three options presented at CES.”

The interface of LG’s Google TV also caught their eyes. T3, aUK based tech review site, said they “felt instantly comfortable with how the interface was laid out.

Based on the wildly popular Android OS, LG provided an interface with easy navigation and browsing experience. It also has convenient multi-tasking support, letting users simultaneously run searches and access social media features while watching their TV. The Magic Remote Qwerty makes the features so much more easier, and of course, you can enjoy the same amazing 3D and Smart TV experience on LG CINEMA 3D Smart TVs! Read more about the LG Google TV here. 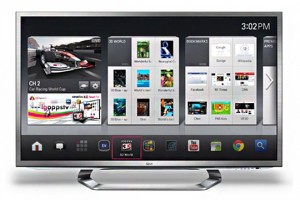 Yes, the CES is over. Much as we want it to keep on going, all good things really do come to an end.

But actually, it’s only just begun. We have the whole year ahead of us, and you’ll be seeing many of the great products unveiled at the CES on the store shelves in no time. Soon enough, you’ll be able to get your hands on our great new lineup of TVs and witness for yourself why everyone was going crazy over our products. There’s so much more to come.