How OLED TVs Stack Up Against Conventional LED Backlit TVs

OLED (Organic Light Emitting Diode) technology is truly something to marvel at, and we’ve been keyed up for a long time about the possibility of rolling out a large screen TV using it. That’s part of the reason why there was so much excitement when we unveiled our 55-inch OLED TV at CES 2012. It’s simply gorgeous, inside and out.

Now, the reality is that you can’t see one in your neighborhood electronics shop for now but it’s coming soon and we thought that with all the buzz about them, it would be a good time to talk about how they stack up with the LED TVs on the market today.

Because make no mistake, existing LEDs are outstanding, too.

First off, what’s the difference?

The main one is that OLED TVs do not require a backlight. They make their own light with an electric current that runs through the organic diodes. In the case of existing LED TVs, the light created by the diodes is driven through a liquid crystal display. So, while it eliminates the old style backlight, there are still a few layers that add to the thickness.

Now, what happens when you pit LG’s 55-inch OLED TV against an average LED backlit TV?

LG’s 55-inch OLED TV is not only the world’s largest TV, but also the world’s lightest and slimmest. Despite its large 55-inch screen size, it weighs just 7.5kgs and the side profile measures in at a mere 4mms. That’s right, the equivalent of 3 credit cards put together! On the other hand, even the slimmest of LED backlit TVs generally measure slightly more than 30mm. Now, we don’t mean to pick on LEDs because we love them and, let’s face it, three centimeters is still pretty thin! But 4mm…that’s really something else!

LED TVs have to use dimming technology to create dark areas. This means that black levels will be dark, but they can never be truly black. OLED TVs, on the other hand, can simply turn off the areas of the screen that, depending on the scene, need to turn black. On top of that, OLEDs boasts an infinite contrast ratio, displaying the smallest color details with the utmost accuracy and clarity. Put the two together, and you have the ultimate color experience. That’s why the contrast ratios between the brightest and the darkest areas cannot compare to existing LED TVs in the market today.

Again, because the OLED lights up organically, OLED TVs have the ability to create virtually every single color in the spectrum. Not so in LED TVs, which need to push light though an LCD matrix to produce the required color. The process of creating colors for OLED TVs is much simpler and much more accurate, resulting in truly rich color experiences. The LEDs do a more than admirable job but the OLEDs will always one-up them. 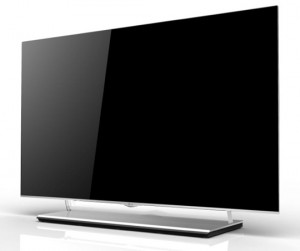 Actually, LED backlit TVs are quite energy efficient. Starting from energy consumption to lighter packaging, the technology is far more eco-friendly than CCFL backlit LCD TVs. But they just can’t do what an OLED can. Without the need for a backlight of any kind, OLED TVs consumes far less energy, either when in use or in standby mode. On top of that, because they are so slim and light, they let us reduce packaging materials and enable more efficient delivery around the world.

LG is just a few months away from rolling out the first large screen OLED TV into the marketplace and, as we said at the outset, there is a lot of anticipation. TV aficionados have been waiting for the large screen OLED TV dream to become a reality. And now it’s just around the corner.