Ever wonder if you really are buying the right TV?

It’s a big investment,  so our advice is this: “Know your tech, make better choices.”

You can read more about the differences in LCD panels here. There’s definitely a lot to be said about different LED types, as well.

What you might not have known is that the majority of the so-called “LED TVs” on the market today are actually LCD TVs with LED backlighting. Since LCD panels cannot emit light by themselves, they require a light source. Previous LCD TVs had CCFL backlights which are not bad, but are generally darker and hungrier for power than the more recent LED backlights that are powering many of the LCD TVs today. The new ones are not only brighter, their pictures are clearer and they are definitely easier on the electric bill.

Sounds great, right? But there are different types and the differences can be good to know about.Let’s walk through them. 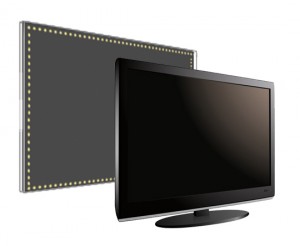 LED lights are much brighter than the old-style CCFL backlights, which are made from flourescent lighting. Taking advantage of their brightness, manufacturers placed the LEDs to the sides of the display, hence the term “edge-lit.” The LEDs at the sides projected light towards to the center of the display through “lightguides.” Edge-lit means a lot less LEDs over full array, making TVs thinner and more energy efficient. But these TVs aren’t without their shortcomings. Because all the LEDs are located towards the side of the display, the lighting is not completely consistent throughout the entire display. Even if your TV is displaying one single color, the edges may look brighter than the rest. 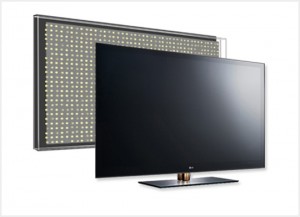 In terms of brightness consistency, the so-called full array LED backlit LCD TVs have a definite upper hand. All the LEDs are placed behind the panel, so they show consistent brightness throughout the entire display. However, the precision required in placing these LEDs is not an easy task, and because more LEDs are required to make the full array LED backlight work, the LCD TV tends to come with a slightly more expensive price tag. Different manufacturers refer to full array LED TVs differently. LG calls them FULL LEDs. 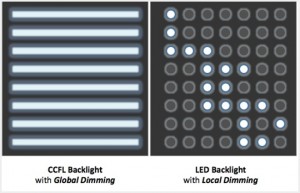 But the real advantage of full array backlighting comes with something that LG calls NANO FULL LED, also known as local dimming. Depending on the picture input, the LEDs constantly turn on and off, making some areas darker and others brighter. This gives these displays much deeper blacks, and a much higher contrast ratio. This technology is not available with standard CCFL backlighting or most edge-lit LED backlit TVs, as they use “global dimming,” where the whole backlight brightens or dims together. NANO FULL LED TVs produce better contrasts and also conserve energy, powering up only the areas you need. Although a handful of edge-lit LEDs offer similar technology, where parts of the TV darkens and parts stay lighted, they cannot be called true local dimming, as the LEDs are not placed behind the entire panel. 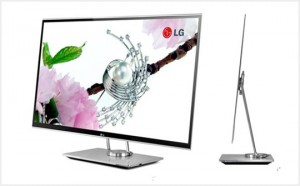 Those panels are all great technological success stories, but how about a panel that produces its own light? Without a backlight, it would be thinner and use even less electricity.

Well, they do exist and we call them Organic LEDs, or OLEDs. It is the true LED TV.

There are so many advantages to these it’s hard to know where to start. Come to think of it, it’s easy, just look at the profile. With no backlight, they are razor thin, just milimeters, really. The secret is that everything is packed in a superthin film that emits light when electricity is applied.

But as they say about books, you should never judge a TV by its great cover. OLED TVs are stunningly thin but that’s not all. They also deliver flawless pictures never before seen in the world of flatpanel TVs. Because the light is organic, the contrast levels are infinite with amazing blacks. It also means you can view your TV from any angle without seeing the changes in color you normally see on a conventional LCD TV.

For picture quality, OLED beats the competition hands down. Unfortunately at the moment, these TVs have limited availability and the prices are a bit steep. But don’t be too disappointed because LG is planning to release breathtakingly slim OLED TVs for general consumers very soon! With that in mind, if you want a reasonably priced LED TV with great picture quality, a full array LED backlit TV with local dimming technology is definitely for you. In fact, LG has a wide range of FULL LED LG CINEMA 3D TVs available that not only deliver great pictures, they’re also cased in superslim designs!