LG OLED: The Battle of Supremacy

LG OLED TV presents Batman Vs Superman, an experience worth living for. As the epic battle gets ready, the very existence of mankind is in danger. Superman a.k.a. Clarke Kent of Daily Planet with his superpower seems to be a great contender but Batman a.k.a. Bruce Wayne with his coolest gadgets and precision too holds a strong position. The question therefore remains, who will win this epic battle of Supremacy as two superheroes come face to face to decide the very future of earth. Who’s the saviour and who, the fake god? Will it be the Man in red cape or the Dark Knight who fights crime by night?

LG India has associated it with Batman Vs Superman: the Dawn of Justice, a Warner Bros. production due to its unique OLED Self Lighting Pixels technology.
LG OLED with its perfect black and perfect color is perfect for this association. It is a display technology invented with the motive of redefining the experience of watching television. It not only creates a unique sense of realism but with its dynamic presence and smart technology just like our superheroes, this LG innovation is one of a kind. This premier category of television with vivid clarity will heighten your experience to an all new level.

What sets this apart from the rest of the product category is its revolutionary perfect black technology. Compared to other televisions, this product doesn’t comprise of a backlight technology and hence the purest of black comes alive on-screen. With infinite contrast ratio even the darkest of the scenes will be visible unlike any other televisions. It uses self-lighting pixel technology capable of switching on and off individually with brilliant whites and darkest of blacks provides the picture with unbelievable depth.

Indeed the revolutionary LG OLED just like a superhero understands the importance of darkness – darkness in form of rage, powerlessness and fear required to save the world each time and every time from the hands of super villains. Experience the power of black with Perfect color. #ColorNeedsBlack.

So, battle it out superfans by participating in our contest #ColorNeedsBlack that is taking place from 18th Mar – 25th Mar 2016 on www.twitter.com/LGIndiaTweets . In the meantime, the fans must vote for their heroes- Batman or Superman. The first part of the contest will let the fans decide, who is the real hero and who they want to win and why?
The second phase of the contest is a situational twist. Imagine you and your friends have gathered to watch this epic battle between the heroes, what is the one thing that will define it as a complete experience?
The contest winners will get Official Merchandise and couple passes for exclusive premier of Batman Vs. Superman two days before the official movie release.

LG OLED is the television partner of the movie Batman Vs Superman. 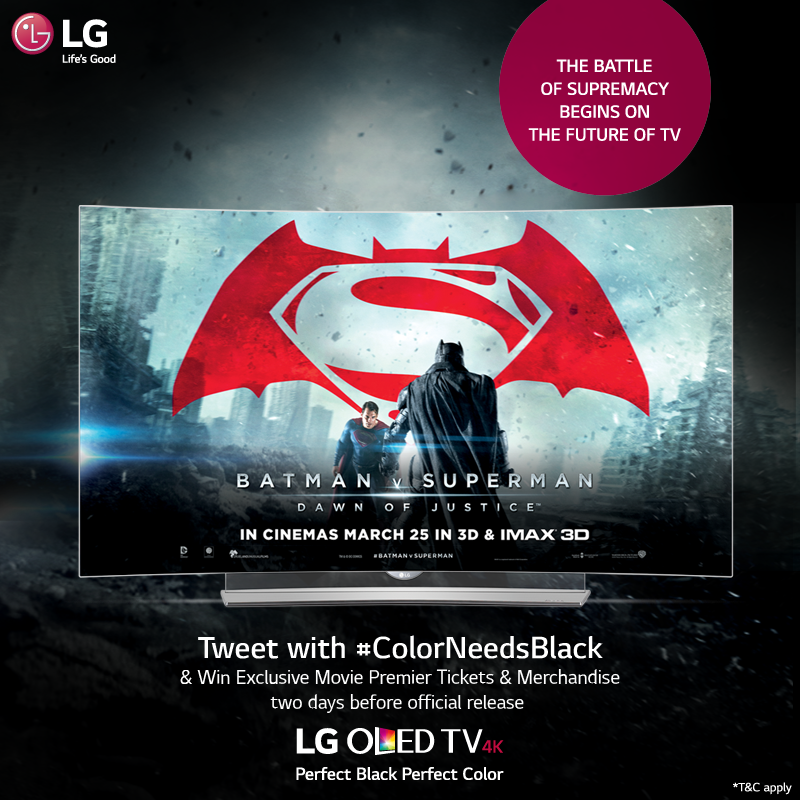