Seems like the wealthiest city of India, Mumbai, had a lashed out morning this 19th  June, Friday as the heavy downpour of rain backed away normal life to a standstill.

But did the torrent exiled the grand launch event of LG G4 with the living legend, Mr. Amitabh Bachchan?

Rather the event set out with the crowd-burst as expected along with the beautiful emcee from the glamour world, Miss Rashmi Nigam… beating out the morning shower in Mumbai to the rhythm of launch event, flagship LG G4.

The legend himself, who owns an ambitious personality, turned up on the stage with a pleasant smile… and delivered an inspiring speech along with apprising the innovative and amazing features of LG G4 addressing the LG personnel, media, LG G4 pre-bookers, and other invitees.

Out of his exploration with LG G4, the great Mr. Bachchan talked much about his cinematic experience with the Quantum Display feature that helps to capture moments in its natural form and spectrum.

Before Mr. Amitabh Bachchan stepped on the floor of LGG4 grand launch event, there was an invigorating speech by Mr. Soon Kwon, MD, LG India, who expressed his gratitude and later greeted Mr. Amit Gujral, Marketing Head, Mobile Communications, LG India. Mr. Gujral carried over the event by delivering an informative and extensive speech on flagship LG G4. He highlighted some of the unique features in LG G4 like smart bulletin and calendar event pocket, which are necessities in our day to day life. 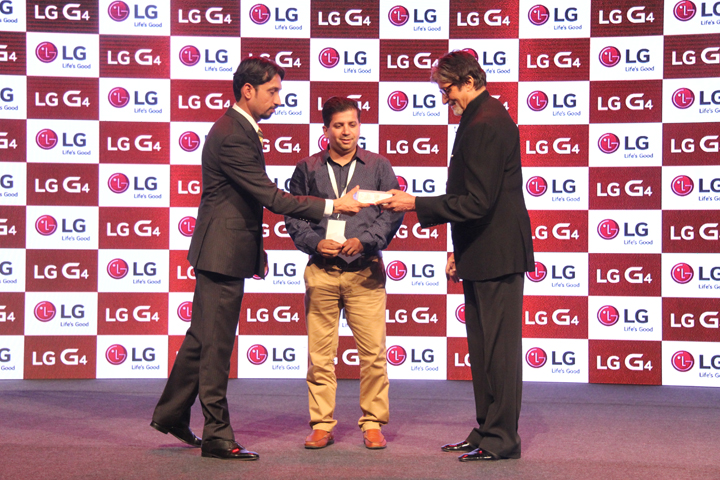 The grand launch event of LGG4 was followed with unboxing of LG G4 and distribution of the flagship smartphone to few lucky LGG4 pre-bookers. The event that was held at NSCI, Mumbai, have seen much of hospitability from the legend himself who took enthusiastic selfies with photographers, pre-bookers, and other people present there. It concluded with a wonderful dance performance that indeed created a sober ambiance.