LG’s CINEMA 3D TV has been turning consumers’ heads all year and it recently caught the discerning eye of the editors at PC Magazine.

In early May, they gave the LG CINEMA 3D 47LW5600 exceptionally high marks in one of their reviews. And just a week later, one of the magazine’s highly regarded tech writers, Will Greenwald, talked about how the industry is finally getting turned on to what he calls ‘Passive 3D.’ What it all comes down to, according to PC Magazine, is that the technology LG is using is the way the industry should go, and the 47LW5600 delivers on the promise of high quality 3D TV affordably and in style. 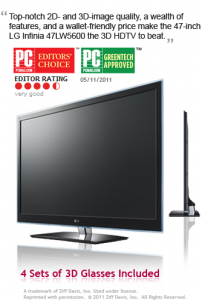 You’re probably wondering what ‘Passive 3D’ is, right? In tech-speak, it’s known as Film-type Patterned Retarder, or FPR. In a nutshell, it’s the key difference between the two main types of 3D TVs on the market today. Conventional 3D TVs use something called Active Shutter Glasses, which are heavy and expensive. To watch conventional 3D TVs properly, you have to stay in the line of sight of the HDTV’s infrared emitter. Worse, the glasses are large and bulky, making them uncomfortable to wear, and the constant flickering can cause serious eye fatigue.

LG gets around those problems with FPR technology in its LG CINEMA 3D 47LW5600, which PC Magazine awarded a 4.5-star rating and named an Editors’ Choice. The magazine was definitely enthused about the much cheaper price of the LG CINEMA 3D TV. But that wasn’t the only reason for recommending it. It also praised the outstanding picture quality, in both 2D and 3D, while talking up the 47LW5600’s many great features.

So how about that 3D quality? To test it, the magazine compared watching the 3D movie Avatar on the 47LW5600 with a conventional 3D TV. As writer John R. Delaney puts it, “I was blown away by the panel’s depth and clarity. The entire picture was crisp and image detail was exquisite throughout. The picture remained bright and color quality was spot on.”

He also gave the 47LW5600 high marks for its design and functionality, pointing out the sleekness of the elegant black bezel, the easy side-accessibility to key ports (4HDMI, 2USB), and the unique Magic Motion remote, which operates almost like a mouse together with the 47LW5600’s incredibly intuitive UI. “I couldn’t put it down once I started using it and would love to see this technology make its way into all TV remotes.”

And don’t forget power consumption. The review referred to the 47LW5600 as a “power miser,” pointing out that the unit consumes just 95 watts on Cinema mode even with the power saving feature turned off. Delaney gave it his “GreenTech stamp of approval” for costing less than $2/month to operate.

At the end of the day, it all comes down to those 3D glasses. As PC Magazine points out, “passive is where it’s at.” Active Shutter types are big, inconvenient, and very expensive, Delany argues, with an average pair costing more than $100. LG ships 4 pairs for free with its CINEMA 3D 47LW5600, they’re comfortable, and you can view the TV from any angle in the room without any eye fatigue. 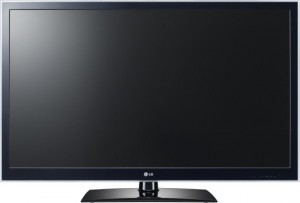 Here’s the final word from PC Magazine on why the LG CINEMA 3D 47LW5600 earns a 4.5-star rating and its coveted Editor’s Choice award:

…the LG 47LW5600 delivers excellent 2D and 3D picture quality, and unlike most 3D HDTVs it comes with the glasses to accommodate a family of four. You also get wired and wireless networking, a cool Magic Motion remote, a nice selection of Web apps, and energy-efficient LED backlighting. At just $1,700, this set is one of the best HDTV deals around, so it’s our Editors’ Choice for 3D sets.