With over 1,000 companies showing off their latest cutting-edge technologies to the public, the Korea Electronics Show is the single largest electronics exhibition in Korea. That’s how the organizers bill it and that’s how it turned out, staged in the massive confines of KINTEX just on the outskirts of Seoul, with journalists, buyers, and consumers alike flocking to the event for three days starting from October 12th.

Naturally we couldn’t miss out on such a great event and opportunity, so we loaded up our gear and went to check out the scene.

To no surprise, the venue was packed with manufacturers boasting their latest state-of-the-art technologies and products. Hopping from booth to booth, it was hard not be dazzled by all the cool technology. It was everywhere and it was impressive!

Also not surprisingly, it wasn’t difficult to find LG at the exhibition. In fact, the highlight of the entire show was right there at the entrance of the LG Booth: a massive 3D screen that was simply breathtaking. The pictures were literally popping out of the screen and we couldn’t wait to get inside. 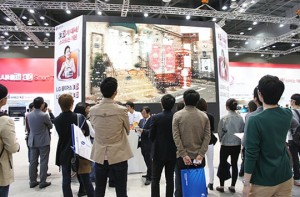 People couldn’t take their eyes off the massive 3D screen at our booth entrance!

And from the moment we put those glasses on, well, it was a brave new world of 3D that opened before our eyes. From the LG CINEMA 3D Smart TVs to the 3D X-Note Notebook Computers, 3D Games, and even to the 3D sound home theater systems, it was a 3D experience that only LG could offer. There was so much fun to be had at the LG booth for everyone!

While manufacturers at other booths were busy touting their advanced technologies, LG gracefully took its tech leadership in 3D and presented an unforgettable experience for visitors. From infants to adults, locals to foreigners, everyone at the booth had a real blast experiencing LG’s 3D world. After all, although people are well aware that LG is a leader in 3D, and one of the few leading manufacturers of consumer electronics in general, what good would all that leadership in technology be if the people using it couldn’t have a great time enjoying it?

We tried to bring back the excitement of the event through this post. But our words may not be enough to captivate all the fun and energy. That’s why this time around we tried something a little different. We took one of LG’s Optimus 3D, a glasses-free 3D Smartphone, and brought back 3D pictures from the event. Download 3D pictures from KES 2011 here. You will need a 3D device (ie. Monitor or TV) to view the pictures in 3D.

We also put together this short clip of the event. We hope you enjoy it as much as we did making it!