Kicking off in Korea earlier this year, the LG CINEMA 3D Game Festival was such a wild success that LG decided to bring 3D gaming madness to the rest of the world. From Asia, Europe, the Americas, and even the Middle East, the festival is bringing gamers and non-gamers from all over the world together. Let us take you on a brief tour of some of the countries that LG CINEMA 3D Festival was held.

Korea is well known for its games and world champion gamers. So when LG took an entire ice rink as the venue for the CINEMA 3D Game Festival, literally tens of thousands of gamers and non-gamers alike flocked to the 2-day event. The venue turned into a stage with massive 3D screen and it was packed with the latest LG CINEMA 3D TVs, LG 3D Monitors, 3D X-NOTE notebook computers, Optimus 3D smartphones, LG CINEMA 3D Projectors and more. The full line-ups of LG’s 3D gadgets were used to enjoy all different kinds of games such as Blizzard’s renowned StarCraft II: Wings of Liberty, X-Box 360 Kinect console games, and wildly popular Korean online RPG game Lineage II.

Some of the hottest Korean celebrities showed up at the event, including an appearance by the beautiful actress Shin Min-a (also the model for LG X-Note computer ads), and performances by K-Pop mega group “Girls’ Generation.” Naturally, gamers went wild. Read more on the event here.

Gamescom is the world’s largest trade fair and event for games and entertainment in Germany. It’s held every year and, this year, LG brought its CINEMA 3D Game Festival there. Over 10,000 visitors took time to drop by the LG booth at the event to experience amazing 3D gaming on LG’s 3D devices and to get a taste of LG’s CINEMA 3D total solution. 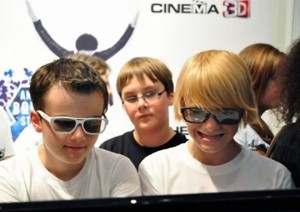 Can you guess who’s winning?

In Russia, the event was held in Mega Khimki, one of the largest shopping malls in Moscow. A 370-inch 3D screen broadcasted living gaming footages of several local celebrity gamers, and other performances were also shown in 3D on the big screen for everyone to enjoy. Over 70,000 people crowded the venue to experience the world of 3D gaming presented by LG.

The LG CINEMA 3D Game Festival in Dubai is not a one-time event like others. This one’s a little special. And the reason we say “is” is because it’s still on going right now! LG has set up 3D gaming equipment (CINEMA 3D TVs, CINEMA 3D Projectors, and more) at what’s called Living Rooms Video Games Cafes and is holding 3D game tournaments there until the end of this year. Contests are held on a weekly and monthly basis to seek the best of the best and the winners will face each other in a Mega Championship finale next year. Small and big prizes from T-shirts to CINEMA 3D TVs have been given out to winners. 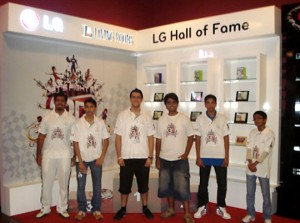 Weekly winners at the LG Hall of Fame

Most recently, LG CINEMA 3D Game Festival made its way into BlizzCon, hosted by Blizzard Entertainment, the makers of Warcraft, Diablo and of course, the StarCraft Series. The event was held in Anaheim, California. LG showed off its full line-ups of 3D products. Gamers from all over the world at the event could experience the cutting edge 3D technology through all the different products.

A new expansion to StarCraft II named Heart of the Swarm was announced at the convention, and it looked amazing when displayed on LG CINEMA 3D monitors, especially the D2342P model which was perfect for viewing dynamic game sceneries. Gamers blown away by the games on LG 3D monitors

Some gamers were completely immersed in their games on CINEMA 3D monitors while others were literally on the edge of their seats while viewing game contests through LG’s 3D glasses. When you see the event, there’s no doubt about LG’s leadership in 3D technology and 3D gaming. Countless visitors had a blast as well.

LG has set out to dominate the world of 3D gaming with the Global LG CINEMA 3D Game Festival. From participation in major gaming events to holding various game events all over world, it has gamers jumping out of their seats. Aside from the ones that we’ve mentioned above, the Game Festival has also been held in Canada, China, and Brazil among others. And it will be held in many other countries by the end of the year. So keep an eye out wherever you are. If you’re lucky the LG CINEMA 3D Game Festival may be coming to your country!