On April 21, LG held one of the most ambitious events in its history as it launched its new CINEMA 3D TVs inEurope. In the beautiful Grand Palais in Paris, LG invited 1,500 stars, media, retailers and customers to what would be the biggest ever screening of a 3D movie on the biggest ever 3D screen – facts now acknowledged by Guinness World Records.

Paris, known for beautiful scenery and rich history, is one of the most visited cities in the world. Once the center of a sprawling empire,France’s capital now stands as a cultural marvel and a showcase of human endeavor. 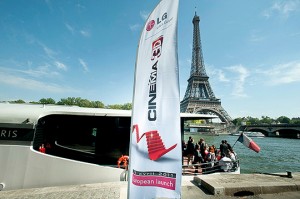 An LG CINEMA 3D flag flutters in the Paris wind, with the Eiffel Tower in the background.

Then, there is the Grand Palais, a magnificent structure built in 1900 for the World’s Fair. Used to stage everything from grand exhibitions to horse-riding contests, it is better known as a symbol of innovation and modernity.

Our France marketing team thought that such a symbolic place – which has inspired the public with art and technology for over 100 years – would be the perfect venue to launch our CINEMA 3D. And they were absolutely right!

Buses emblazoned with CINEMA 3D logos pull up by the Grand Palais. 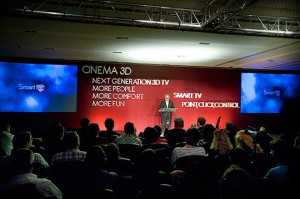 With the venue secured, visualizing the event was exciting – overwhelming, even. With some big decisions and the full support of our top brass, we collaborated with six teams from LG HQ and theFranceoffice to plan the most ambitious event I’ve been part of in more than 10 years of marketing.

The challenges were many and daunting. Due to government regulations, booking the Grand Palais would ordinarily have to be done more than a year in advance – we had two months. In that time, we had to pull out all the stops to persuade the authorities to let us use the Grand Palais, while we simultaneously planned an event that would normally take at least six months to pull off.

Most galling of all, though, was ensuring the event befitted the stature of the venue. We originally pitched the event as the biggest ever 3D movie screening for the public – but we knew that even this wouldn’t be enough. The authorities in charge of Grand Palais are very strict about its events not being too “commercial,” so we had to come up with something really creative, but which also clearly communicated what makes CINEMA 3D so special.

Our solution was to turn the Grand Palais into a “total 3D playground.” As visitors wandered around with their CINEMA 3D glasses, they would pass an entire side of the Grand Palais set up as an “experience zone,” where they could see for themselves the difference between CINEMA 3D TVs and competing 3D sets. Nearby would be a section of 3D video games, 3D projectors and 3D computer monitors, while the halls inside were lined with the latest CINEMA 3D TVs broadcasting the entire event live in 3D. 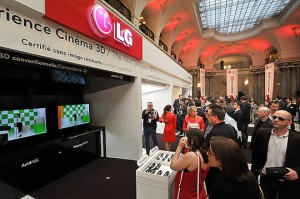 At the “experience zone” at the Paris launch event, visitors had a chance to see for themselves the difference between CINEMA 3D and older technologies.

The other side of the Palais was transformed into a breathtaking 3D movie theater, with space for 1,500 viewers. LG in fact set two world records that night: the biggest ever 3D movie screening, and the largest 3D projection screen (27 meters by 11 meters).

In keeping with the theatrical atmosphere, we hired Isabelle Giordano, a prominent move critic, to host the show, and invited along actor Sophie Marceau, director Claude Lelouch, and a host of other top French celebrities. There were turns from French magician Dani Lary and Brazilian dance troupe Brasilian Ambience. And, of course, we screened the 3D animation blockbusterRIO, which had opened just a few weeks prior to the event. 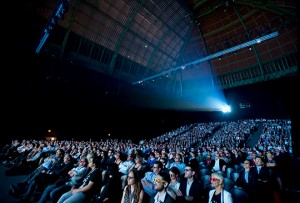 A record 1,500 people marvel at a screening of animated blockbuster RIO, shown on the world’s biggest ever 3D screen.

Managing the entire event, which also included a daytime show for press and sales staff, was a formidable undertaking. Adding to the fun were the cultural differences between our teams fromKoreaand the French staff on the ground. In one nail-biting example, we encountered difficulties when testing the 3D videos before the main event.

With just two hours remaining in which to fix it, the technical staff went for lunch for a little over an hour. But when they came back, with 30 minutes to spare, they promptly fixed the equipment right up, and it worked perfectly. Among many other things, we learned that the French style of doing things – though very different from ours inKorea! – can work wonders. 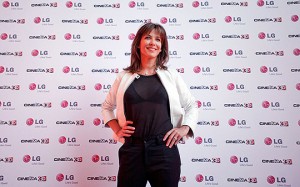 Sophie Marceau, a very special guest at the event, poses for the cameras. 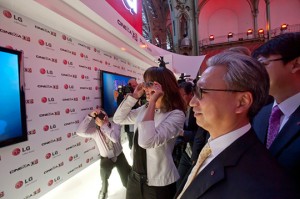 Along with top brass from LG, French superstar Sophie Marceau checks out LG’s CINEMA 3D for herself. 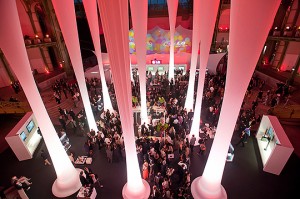 The spectacular interior of the Grand Palais, specially decked out for the CINEMA 3D launch event.

Jin Choi worked in the field of Marketing Communications for LGE US and HA Company. Now as a member of the Europe LCD TV Marketing team, he is now responsible for supporting France market and dedicated to making LG TV No. 1 globally.